The Fog is one of the many horror remakes that no one had ever asked for.  The original John Carpenter directed movie was fine but hardly the classic that many other Carpenter movies have been.  Regardless, someone thought it was a good idea to remake it and I’m here to try to give it a fair shake.

Antonio Island, Oregon is a quiet seaside fishing village with a dark secret.  Nick Castle (Tom Welling) is a fishing guide and Stevie Wayne (Selma Blair) is the town’s radio DJ.  Elizabeth Williams (Maggie Grace) comes back to town after six months in New York and a weird fog begins to roll in at night causing strange occurrences and deaths.

I realized about half way through The Fog that I had seen it before.  Guess it made a big impression on me the first time… 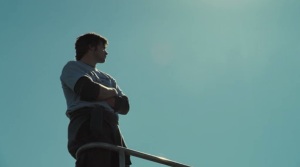 There are essentially three characters in The Fog.  First up is the completely bland fisherman Nick Castle, played as blandly as possible by Tom “Smallville” Welling.  I never really got into Smallville so Tom Welling doesn’t bring any added charm to this movie.  I’d bet the producers just needed to make sure they had young attractive actors in the three main parts and didn’t worry about much else.

Next up is Selma Blair’s Stevie Wayne, a dark and tormented soul.  You can tell she’s tormented because she wears mostly black and plays bad ‘90s alternative music from her lighthouse radio station.  And she has a kid… out of wedlock.  See, she really is ‘90s alternative a decade too late.

On the plus side, Maggie Grace is awfully cute even if her character, Elizabeth, is only slightly less annoying than her character on Lost.  I can’t help but like her even if she isn’t the world’s best actress.

The whole premise for the movie is that these forefathers of Antonio Island who have been idolized for decades had actually perpetrated a great atrocity against a boat load of gypsy lepers which is now coming back to haunt (literally) the descendents of this quaint seaside town.  The problem is, we, as viewers, don’t get a full understanding of just how much these four men meant to this area.  We are shown that a statue has been commissioned in their honor but little else to back it up.  I don’t need a full on history lesson but a little more context for a movie that is so firmly based in its own fake history would have been nice.

The effects are pretty solid for the most part.  The fog mostly looks like fog and entities sneaking through the fog are sorta creepy, at least until you actually get a full on view of them.  The big downside is that the movie then resorts to cheap jump scares, dumb deaths and “I can’t see where I’m going” car crashes.

The Fog is jam-packed full of jump scares that may or may not make sense based on the source of the paranormal activity – the haunted fog.  Strange stuff shouldn’t be happening if THE FOG isn’t rolling in but there is almost more weird happenings when it is nice and sunny out.  Hair brushes light on fire, a girl is dragged under the water by seaweed and dead bodies come back to life… all in the middle of the day with crystal clear skies.  And as with any movie of this sort the viewer is left wondering why people don’t just pack up and move out especially since there appears to be nothing else these people can do to actually combat the fog, other than hiding in a freezer of course.

It’s a little cliché to say a modern horror movie isn’t scary but The Fog really isn’t even remotely scary.  I’m not sure if it was even scary back in 1980 but it definitely isn’t now.  This whole idea of an evil haunted fog just seems so B-level horror movie it’s a wonder that this even made it to screen.  If it hadn’t been for this being a remake it probably never would have.

I wouldn’t throw a title like “worst movie ever made” at The Fog or anything but it just feels rather pointless.  There was no reason for this movie to be made/re-made and there’s little reason to actually watch/re-watch it.