A Battle of Legendary Proportions

Synopsis:
When Rumpelstiltskin destroys the Magic Mirror and escapes to the modern world, Cinderella, Sleeping Beauty, Snow White and Rapunzel chase after him, armed with combat training and magical powers.

Avengers Grimm is one of a string of films (term used loosely) released by Asylum using titles similar enough to major releases to potentially confuse a person into purchasing/renting/pay attention to their movie instead of the movie they were intending.  The movies themselves rarely have any resemblance to the movie whose title they were parodying.  Avengers Grimm was obviously hoping to cash in on the popularity of Marvel’s Avengers.

The actual idea behind the film happens to be one of Asylum’s best I’ve ever personally seen.  Take four fairytale princesses and turn them into a superhero team by giving them magic powers based around each of their fairytale stories – Rapunzel has a mace at the end of her long hair, Sleeping Beauty can put enemies to sleep, etc.  Going along with the fun idea, the fights were surprisingly entertaining as well, a rarity for an Asylum release. 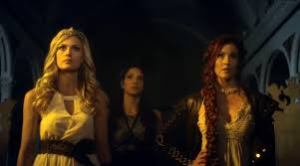 I should probably get the obvious out of the way though…  The acting, dialogue, story and effects are all bad.  Really bad.  It’s become unclear whether Asylum is intentionally getting actors to act poorly, the actors they can get in their films just generally aren’t good actors or the film production is so rushed that there is little time for multiple takes to get things right. Whatever the reason, Asylum releases are not well made movies.

There were a couple of extra fun casting choices that probably added a bit to my overall enjoyment of the film.  Lou Ferrigno is Iron John, which is a really silly nickname for a big dude… until Rumpelstiltskin turns him into a big dude with silver painted skin.  Then it all makes sense.  Former UFC fighter Kimo Leopoldo is also present as The Wolf, of Red Riding Hood fame.

I certainly haven’t seen all of Asylum’s movies.  They crank out more movies than Jackie Chan.  A person could devote an entire blog to their less-than-mediocre films.  And yet, I’d rank Avengers Grimm among the best Asylum movies I have ever seen.  Saying that might sound a bit like saying this movie is the brightest, shiniest turd on the stack but it is what it is.

Avengers Grimm wasn’t good enough for me to ever likely watch it again but I would give any potential sequels a shot if they came across my cue in NetFlix.

ADD IT TO YOUR COLLECTION!!!