We Are The Endangered Species.

“You guys got soldierin’ questions, you come to me.” – Trent Parker

Synopsis:
Five years after a zombie apocalypse, a camera crew follows a team of soldiers, known as R-Division 8, who discover that the creatures they thought were destroyed were coming back to finish off the survivors.

Re-Kill is a silly, weird movie that had originally caught the eye of action movie fans back in 2010 or so due to the involvement of Scott Adkins. Well, five years after it was supposed to be released and it is finally here… and maybe it would have been better if it had stayed buried in development purgatory.

Re-Kill doesn’t have the worst idea behind it. It tries to present a zombie apocalypse through a found footage type lens but puts a spin on it by treating the entire movie as if it is a long episode of COPS. The idea was interesting but in execution it just doesn’t work. Because of the semi-humorous commercials that occur every 15-20 minutes, all of the action and story happen in short bursts with a main character death happening prior to most commercial breaks.

The action itself essentially amounts to shaky cam footage of gunfire that may or may not be directed at the zombies. I say may or may not because the camera work doesn’t give us any clue what is really happening at any given point.

The zombies or re-animates or re-ans probably look acceptable for this type of movie but it’s really hard to tell though. Most scenes are very, very dark and each zombie is probably only on the screen for a fraction of a second due again to the shaky-cam aesthetic and them being the running zombie variety of undead. 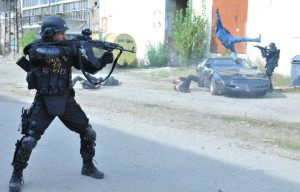 Scott Adkins is usually the highlight of just about any movie he’s in. In Re-Kill, he’s just another soldier who yells a lot and shoots re-ans. Not that Scott Adkins always needs to be a martial arts master in every movie but it is disappointing to see him totally wasted in a role like this. But it was filmed pretty early in his career so…

So the only original things that Re-Kill brought to this heavily over-worked genre didn’t end up working in its favor. The TV show aesthetic was broken from the get go and Scott Adkins wasn’t used to his potential. What we’re left with is a run-of-the-mill, at best, zombie movie.